When I reflect on my childhood baking memories, one that stands out is a tray of warm chocolate chip cookies coming out of the oven. It was so tempting to eat the raw dough while making them — talk about a lesson in delayed gratification — but in 20 or so minutes, delicious buttery, sugary cookies dotted with chocolate chips would be ready to enjoy.

Never mind fancy desserts; chocolate chip cookies have always been one of my favorite treats. And if you are like me and find them irresistible, you probably can’t stop after a few bites.
“Even today, after eating and living with them for 40 years, I still can’t stop eating them,” said Kathleen King, founder of Tate’s Bake Shop in Southampton, New York, and creator of the top-rated chocolate chip cookie according to Consumer Reports. “I am either eating no cookies, or I am eating several. I can’t have one.”
But what exactly makes chocolate chip cookies so universally craved in the first place?

“I think a lot of it has to do with the connection to our past, whether it was a grandmother, a mother, a place visited, a summer home or family time. It’s also usually the first cookie every child learned how to make, and so I think there’s a tremendous emotional attachment and remembrance with the chocolate chip cookie,” King said. “Lifestyles are changing, but that connection is still hanging on.”
Eating chocolate chip cookies can be associated with a range of emotions. “If I’m celebrating, I can have a couple of cookies, but if I’m sad, I want 10 cookies,” she said. “While the cookie is in your mouth, that moment is happiness — and then it’s gone, and you’re sad again, and you have another one.” 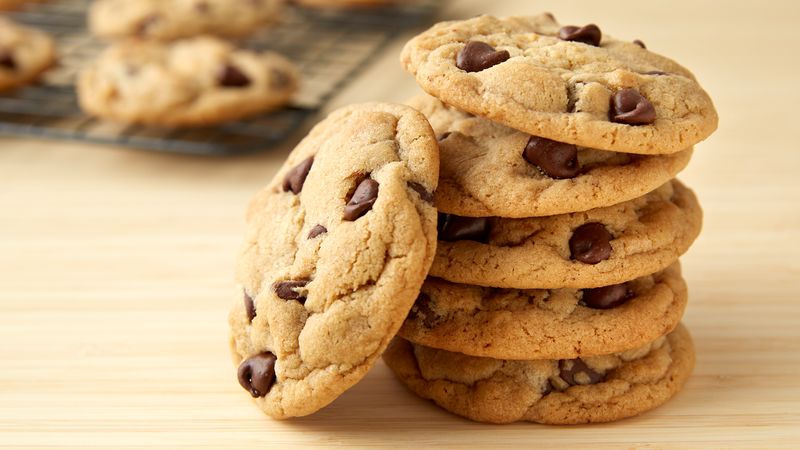 Aside from the emotional comfort that chocolate chip cookies may provide, there may be scientific explanations for why we salivate for them. Some research suggests that ingredients in chocolate chip cookies may have additive properties. Take sugar: Evidence in humans shows that sugar and sweetness can induce rewards and cravings comparable in magnitude to those induced by addictive drugs, including cocaine.
A traditional chocolate chip cookie recipe calls for ¾ cup of granulated sugar and ¾ cup of brown sugar, yielding 10 grams, or 2.5 teaspoons, of sugar per cookie. Then there’s the chocolate, which, in addition to sugar, contains small amounts of a compound known as anandamide. Interestingly, anandamide is also a brain chemical that targets the same cell receptors as THC (tetrahydrocannabinol), the active ingredient in marijuana that is responsible for its mood-altering effects. That’s not to say chocolate will produce the same “high” as marijuana, but there may be a chemical basis for the pleasure we get from eating chocolate.
According to Gary Wenk, director of neuroscience undergraduate programs at the Ohio State University and author of “Your Brain on Food,” high-fat, sugar-rich cookies will raise the level of anandamide in our brains independent of what’s in the cookie, because it’s our body’s response to eating such a tasty item. “The fat and sugar combine to induce our addiction as much as does the anandamide,” Wenk said. “It’s a triple play of delight.”

Texture and flavor: Key to a cookie’s addictive characteristics

All of this science may sound intriguing, but the simplest explanation for why chocolate chip cookies are so delectable may have to do with the mix of ingredients that combine in a way that appeals to our senses.
“A chocolate chip cookie is a brilliant contrast among the flavors and among the textures,” said Gail Vance Civille, founder and president of Sensory Spectrum, a consulting firm that helps companies learn how sensory cues drive consumer perceptions of products.
The flavor of chocolate chip cookies, according to Civille, is “a beautiful amalgam of caramelized butter and sugar,” the result of the browning of butter and caramelizing of sugar while it bakes. The combination of the toasted grain with the browned butter, caramelized sugar, vanilla and chocolate are “the beautiful rich flavors that blend together in a chocolate chip cookie,” she said. And as the chocolate melts, it becomes more aromatic and punches up the flavor.
It sounds counterintuitive, but salt is important too, even in sweet treats. “It is what adds interest to food, even if it’s a sweet food, because it makes the sugar and other ingredients taste better and come together better,” Civille said. “A pinch of salt in cookies really makes a difference, and it enhances sweetness a little bit.”

King noted that “with Tate’s, we were the first to do the thin and crisp, which is kind of an addictive mouthfeel, and we were also the first to do a little bit heaver on the salt. People don’t even put salt in cookies, but [without salt], it tastes flat.”

Other secrets to making delicious chocolate chip cookies include using butter instead of shortening or margarine; brown sugar, which has a molasses-like quality to it; and pure vanilla, according to King. A high-quality flour and a really good chocolate chip are also important.
The texture of chocolate chip cookies also plays a big role in their appeal. “Just on the texture side, [the chocolate chip cookie] has a lot going for it,” Civille said.
“Every bite will be interesting. … You will hit the cookie, which has crispness due to air pockets in the cookie crumb, and then the chocolate, which is dense and uniform when you bite through it. It’s like a symphony orchestra playing together. … It’s very harmonious,” she said.
One of the simplest ways to test whether the flavor and texture of chocolate chip cookies are “addictive enough” is to observe people eating them. “When I would create any product, if I put it out as a sample to my staff and if I didn’t watch them unconsciously go back and take some more, then I felt it wasn’t good enough. There’s a lot of good, but I didn’t want good. I wanted that addictive thing,” King said.

Whatever one’s individual chocolate chip cookie preference — or “addiction” — it’s fair to say that these beloved cookies can have a place in a balanced diet, as long as you are willing to keep portions in check. “The main thing is not to think of food as good food and bad food. It’s all good. It’s how much you eat of it,” King said. “I used to be overweight, and I had that in my mind, if I ate a cookie, that was bad and now the day is ruined, instead of just, ‘that’s cool.’ ” So whether it feels like a true “addiction” or not, indulging in a chocolate chip cookie or two should be a happy experience.
Previous Article

What is ‘good’ chocolate, according to renowned pastry chef Nick Malgieri